A Roadmap to Redemption: The Jewish High Holidays

Shalom in His grace.  This is a very special season of the year!

In fact, every Jewish community in the world is focused right now on observing what are usually called the High Holidays. These holidays are three:  the New Year (Rosh Hashanah), the Day of Atonement (Yom Kippur), and the Feast of Tabernacles (Sukkot).

These holidays, or more properly holy days, are quite similar. First of all, they are described in Leviticus 23. The Day of Atonement has another entire chapter devoted to it in Leviticus 16.

All three holidays are observed in the seventh month of the Jewish calendar. This is the month called Tishrei in Hebrew and usually falls in September or October as the Hebrew/biblical lunar calendar is quite different from our Western version.

The Feasts of Israel

These three fall festivals are linked to the list of those found in Leviticus 23. Each holy day is similar to the others, yet also has an element or two pointing to some unique aspect of God’s plan and purpose for the Jewish people and all of mankind. Most of the festivals memorialize a great historical event. They also have a prophetic function. In fact, I like to say that they seem to look back in order to look forward.

Passover is a clear example of this principle, as the holiday looks back to the deliverance of the Jewish people from Egypt and forward to a day of greater salvation!

The prophetic character of these holidays is important. The holy days were given to the Jewish people as signposts or prophetic portraits of things to come. I also like to view the holy days as settings created for the diamond or the beautiful jewel that was to be placed at a future day.

It will not surprise you to know that I believe Jesus is the diamond—the beautiful, sparkling Jewel. When the beauty of His person is viewed in light of the Jewish holidays, His splendor and brightness shine even brighter.

Prophetically, this order of the festivals makes complete sense, especially in light of the coming of Jesus the Messiah. Jesus died on Passover—as the Lamb of God who takes away the sin of the world. He was sinless—unleavened—and therefore qualified by His perfect obedience to be our atonement for sin. He rose on Sunday—the day after the Sabbath attached to Passover and Unleavened Bread, which was First Fruits. Jesus is the first fruit from among the dead as described by the Apostle Paul in 1 Corinthians 15:2-23.

Finally, God poured out His Holy Spirit upon the Jewish disciples gathered in Jerusalem for the Feast of Weeks, as recorded in Acts 2—which was no coincidence! As the birthday of the church, we celebrate Pentecost—the Spirit-fused unity between Jews, Gentiles and the Messiah.

If the first coming of Jesus is linked to the four spring festivals, then we can only deduce that the fall festivals have great prophetic significance as well.

(Leviticus 23:23-25). The Jewish New Year is entitled “a reminder by blowing of trumpets” in the book of Leviticus. Jewish tradition understands this to be the shofar or the ram’s horn. You will be disappointed if you try to find that the New Year is in some way related to this first festival in the month of Tishrei. This first holy day of the seventh month came to be interpreted as the New Year later in rabbinic tradition and is usually viewed as the beginning of the Jewish “civil year.” Passover, which begins in the first Hebrew month, Nisan, is the start of the Jewish “religious” year.

Biblically, Rosh Hashanah is the Feast of Trumpets. The trumpet was sounded to alert the Jewish people to what was coming, which could be some type of danger or major announcement.

The Day of Atonement

(Leviticus 23:26-32; 16). In this instance, the event emphasized by the trumpet would come ten days later—The Day of Atonement—understood as the holiest day on the biblical calendar!

This was the day when the High Priest would slip behind the curtain separating the Holy Place from the Holy of Holies and offer the blood of the sacrifice on the mercy seat to make atonement for sins previously not atoned for by the Jewish people.

The Feast of Tabernacles

(Leviticus 23:34-36, 39-44). Seven days later, the Israelites would build booths reflecting the frailty of human life in the wilderness. They would also bind together various branches of trees and a citrus fruit and then wave these elements before the Lord, thanking Him for the final harvest of the year and praying for His provision for the following year. These days, Jewish people shake the bound branches, called the lulav and a fruit similar to a very large lemon called the ethrog as part of the contemporary festival ceremony.

The Prophetic Fulfillment of the Feasts

Like the spring feasts, those designated for the fall also find their fulfillment in Jesus the Messiah and the events associated with His second coming. The blowing of the trumpet is referred to by the Apostle Paul in a number of New Testament passages which indicate that the trumpet blast will be heard immediately before the second coming of Jesus the Messiah (1 Thessalonians 4:16-17).

The Day of Atonement was fulfilled through the death of Jesus and His first coming. However, there will be another great day of atonement for the nation of Israel. It is described in Zechariah 12:10, where the prophet tells us that the Jewish people “will look to Me whom they have pierced.” This describes the moment when the remnant of the Jewish people in the last days will turn to Jesus as Messiah.

According to Zechariah, this great prophetic event is linked to the second coming. The chronology seems to indicate that this initial turning of the Jewish people to Jesus brings about the return of the Lord. The prophet also predicts that Jesus will come and conquer the enemies of God and of the Jewish people in chapters 12-14.

Chapter 14 further prophesies that the nations of the world will come to Jerusalem to celebrate the Feast of Tabernacles. The prophet envisions the nations of the world submitting themselves to the Lord and enjoying the grace and mercy found within God’s future tabernacle, which encompasses our curse-lifted planet. This is the fulfillment of Genesis 12:3 as God told Abram that the world would be blessed through the Jewish people as further described by Paul in Romans 11:12, 15, 25ff.

Jesus’ coming is somehow linked to the sound of the blowing of the trumpet, and soon thereafter the redeemed will experience the fullness of His blessings provided through His sacrifice on Calvary. His kingdom will be established in Jerusalem for the blessing of all.

The Fall Festivals of Israel remind the faithful that there is more to come!

Please remember to pray for Your Mission to the Jewish People as we reach out to God’s chosen people during this season of the year. We will have more Jewish seekers attending our Bible studies, services and congregations during the next few months—perhaps more than any other time of year, except for Passover. So please pray that Jewish people will see the beauty of Jesus in the setting of these prophetic festivals.

I thank you for your love, prayers and financial support. We could not do this great work of reaching out to God’s chosen people without your help. 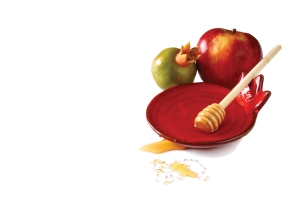 P.S. Please keep praying—especially for the follow up to Shalom Brooklyn, our short-term outreach recently held in the Jewish heartland of North America and the impact of our online outreach campaigns (Isaiah 53 and I Found Shalom), especially as we enter this very special holiday season.

Wondering about the apples and honey? Visit chosenpeople.com/highholidays for more information on the Fall Festivals!

Tagged as Jewish High Holidays, The Feasts of Israel